Home What we do Inspiring stories Tillie’s story 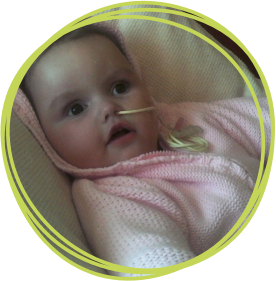 Tillie was born with Severe Extreme Hydrocephalus and received care at Children’s Hospice South West’s Little Bridge House during 2006 and 2007.

The condition meant that she only had approximately 10 per cent of her brain tissue present, but this was damaged due to the fluid that was present in her head.

Tillie wasn’t able to do what most babies can do. She was fed by tube, had to be injected twice a day and was on various medications all throughout the day, every day.

She was unable to support her body in any way and could not see. To us we were blessed to have had her – the warmth of her smile made it all worthwhile.

Little Bridge House provided invaluable support, which meant we could spend time with our son Josh, who was three at the time, and enabled him to have some understanding of what was happening.

Tillie very sadly passed away at Little Bridge House on March 21, 2007, 14 months young. The care Tillie, myself, my husband and Josh received was incredible.

We were dealing with what was one of the worst things imaginable, however, Little Bridge House made this difficult time a little bit easier.

Children’s Hospice South West is purely funded by charitable donations. We would like to see more families benefit from their support in extremely difficult circumstances. Without generous donations from people like you, they would not be able to continue with their work.

The alternative to hospice care is a family dealing with this at home or in an NHS Hospital where it is usually under-staffed, under-funded and over-stretched.

We can look back at this time as a family and see the positives that Little Bridge House offered us and would like other families who it is inevitably going to happen to, to have the same level of support and care that we did and still have.

Jenny and her family have lent their on-going support to CHSW raising thousands of pounds for the charity, including more than £18,000 in 2018.

Donate to the Tillie’s Stars appeal