Home What we do Inspiring stories Tayen's story 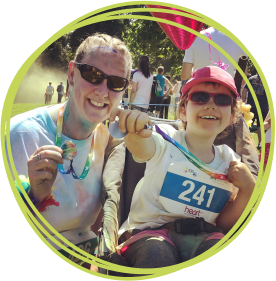 Tayen from Bridgwater is seven years old and has a genetic condition called Neurofibromatosis Type 1
Despite her condition, Tayen has a zest for life and enjoys spending time with her family; mum Kali, dad Kevin, and her brothers

Tayen's condition is incurable and causes tumours to grow on nerves anywhere in her body. She has complex epilepsy, hydrocephalus and is fully blind. Tayen has already endured several rounds of chemotherapy and may need more at some point in the future.

Despite her condition, Tayen has a zest for life and enjoys spending time with her family; mum Kali, dad Kevin, and twin brothers Lucus and Connor age 11 and older brother Matthew, 13. 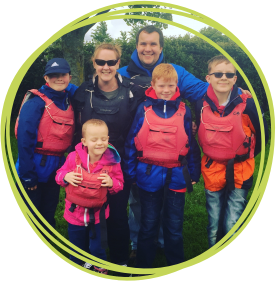 Here, Kali explains the challenges Tayen faces and how the hospice helps the family:

"I noticed something wasn’t right when Tayen was about 8 months old. She’d pick up every virus going, I’d be taking her to the doctor’s a lot. They could see she wasn’t happy but they didn’t know what was wrong. It hadn’t developed into an infection, so they didn’t know what to do to make her better.

"At 22 months old, Kevin was getting ready for work in the early hours of the morning and heard noises coming from her room. He went in to check on her and found her on the floor. She’d been sick and was having a seizure and we had no idea how long she’d been there for. The ambulance came and she didn’t stop seizing until we got to the hospital, despite the amount of meds she had pumped into her.

"Lots of test were done, she was put on antibiotics but they couldn’t find anything wrong. It was then that the doctor said they were going to do an MRI. I was so relieved as I instinctively knew there was something very wrong.

"Whilst Tayen was in hospital, all I wanted was to cuddle her, but she was exhausted from her ordeal. For 24 hours we waited to hear the results.

"We were told Tayen had legions that had spread through her brain. She would be referred to Bristol Children’s Hospital. We had to have training on all the medications she now needed and went home.

"We were in a daze and I couldn’t quite grasp the severity of it. It didn’t occur to me that chemotherapy would be an option.

"The following week we were told she needed chemotherapy to try and save the vision she had left and went back to Bristol Children’s Hospital to begin treatment started. The first 15 weeks were hell; Tayen was really poorly. And then six-weeks in to treatment we found out she’d lost her sight completely.

"We questioned why we needed to continue with such intensive treatment if her sight had already been lost, but it was then we were told how extensive the tumours were and chemo was needed to continue to save her other functions. For the next 18 months Tayen continued receiving chemo.

"When Tayen stopped her treatment we were on our own and for the first year she was quite stable, but then she started to go downhill. It was quite subtle at first until the day she was rushed into hospital with severe pains in her head and she needed bilateral shunts as she had severe hydrocephalus. She was really very poorly.

"Once again, after some time she became better and we went home. Whilst at home she wasn’t in any pain but she’d just want to sit on the sofa, which wasn’t like her at all.  So I knew something wasn’t right. Tayen needed even more chemo, which she had for just short of a year. Since then she’s not been the same. I feel she lost a part of her spirit around that time; around the age of 5.

"We were referred to Charlton Farm by Tayen’s epilepsy nurse who’d previously worked there. I had already heard about the hospice as I’d known several children who had respite stays there. Kevin and the boys didn’t really know what to expect but we visited, and all the children loved it. The boys were really relaxed, which was nice for us to see. Everything felt very calm and chilled and I could see straight away that Tayen absolutely loved it.

"I found the first night we ever stayed quite stressful! I’m not used to relaxing and I wasn’t sure how much to let go. I didn’t know how it would fit in with our life and almost felt like we didn’t deserve to be there. We desperately needed respite as a family and I wanted to embrace it but found it hard. We knew the adjustment would take time.

"Tayen loves everyone there - she gets so excited. We stay there as a family although when we’re there Tayen doesn’t want me or her dad or her brothers near her. She sees it as her time, her play time and the boys love to go out with the Sibling Team - especially when there are siblings staying who are same age!

"We don’t know what the future holds. We don’t know if Tayen will have more chemo. We don’t know why her brain is doing what it’s doing. Her condition is complicated. It’s so hard to know what is causing the various behaviours she has. We often wonder, is it epilepsy causing the problems? or is it the tumours playing up? She often has chronic body pain to the point where she vomits and yet she can be so full of life. One thing we do know is she’s not ready to give up and neither are we."