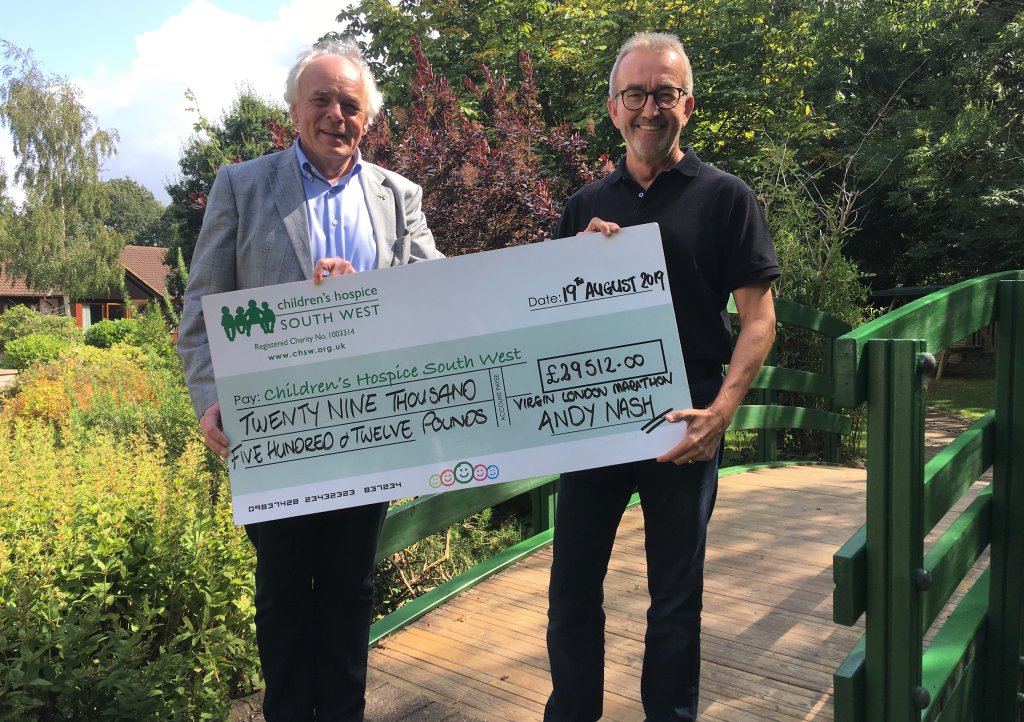 The former chairman of Somerset County Cricket Club has presented a cheque for £29,512 to Children’s Hospice South West (CHSW).

Andy Nash ran the London Marathon for CHSW in April and visited the charity’s Little Bridge House hospice in North Devon this week to deliver the efforts of many months of fundraising.

Andy, 61, from Cheddon Fitzpaine near Taunton, pledged to raise £26,000 – £1,000 per mile – and said he had been bowled over by the support he’d received from friends, family and staff at the charity, as well as former colleagues at the Cooper Associates County Ground.

Presenting the cheque to CHSW co-founder and chief executive Eddie Farwell on Monday, August 19, Andy said: “It was a really positive thing to be involved with and an experience I’ll never forget.

I’ve had support from a huge amount of people – everyone was happy to put their shoulder to the wheel.

“The help I had from the hospice itself was also exemplary and the team there came up with some great fundraising ideas,” he added.

Online donations to Andy’s Virgin Money Giving page totalled around £16,000, while an eBay auction of cricketing memorabilia raised around £7,000. Friends also got behind him by holding a ceilidh that raised just over £3,000, and a beer and cheese tasting evening raised just over £2,500.

He also had backing from businesses including Bray Leino, and he and his supporters sold thousands of Grand Raffle tickets to help boost his fundraising total.

Andy, who has type 2 diabetes and only started running in March last year said he intends to keep running and now has this October’s Valencia Half-Marathon in his sights.

If you'd like to run the London Marathon for CHSW next year there's still time to apply for a Gold Bond place.