Her Royal Highness met with children and families and heard about the challenges they have faced during the pandemic, and how the hospice, which is run by Children’s Hospice South West (CHSW), has been helping them through this difficult time. 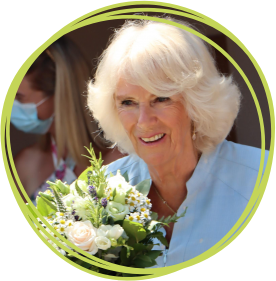 The Duchess, who became the Royal Patron of CHSW in 2015, was taken on a socially-distanced tour of hospice and gardens, including the Narnia-themed sensory garden, by the charity’s Co-founder and Chief Executive Eddie Farewell, and Director of Care Allison Ryder.

After planting a tree to mark the 30th anniversary of the foundation of CHSW, the Duchess also met with long-standing supporters, friends group members, trustees and volunteers.

Speaking at the hospice in Fremington, near Barnstaple, The Duchess said: “I’m an incredibly proud patron and I really wanted to thank everybody who has been involved with this wonderful children’s hospice.”

“Before I ever visited a children’s hospice, I wasn’t quite sure what to expect because I thought they were going to be very sad places, but they are so wonderful, so uplifting and welcoming. Everybody always seems to be laughing, which is a huge asset to these places.

I know, having spoken to a lot of parents, they just wouldn’t have been able to cope without you all.

"I really wanted to say a huge, huge thank you for the incredible job you do."

On leaving Little Bridge House, The Duchess was presented with a posy by eight-year-old Evie Smale from Bideford. Evie’s older sister Imogen died in 2016 and the family receive bereavement support from the hospice. 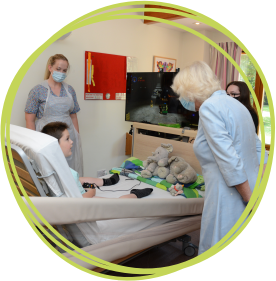 Mum Emma said: “It’s the best place ever; our daughter Imogen absolutely loved coming to the hospice and we made so many wonderful memories here that we will keep forever. The hospice massively supported us when Imogen died and without them I don’t know what we would have done.”

Little Bridge House supports around 200 local families and its doors have remained open every day during the pandemic. The hospice has continued to provide end-of-life, emergency and resilience stays, and for the first time ever, care teams have also taken their support to families in their own homes.

It was the first time that a member of the Royal Family has visited the hospice, which opened in 1995. In July 2013, The Duchess of Cornwall visited the charity’s Little Harbour hospice in St Austell, while in 2016 she attended a Service of Thanksgiving at Exeter Cathedral in celebration of the charity’s 25th anniversary. During Children’s Hospice Week last year, The Duchess joined a special Zoom call with The Duchess of Cambridge and CHSW Co-founder and Chief Executive Eddie Farwell.

Mr Farwell said the visit to Little Bridge House was a major highlight for the charity in its 30th anniversary year, and particularly special after such a challenging time for its three hospices and the families it supports.

We are thrilled to have The Duchess of Cornwall as our patron.

Her Royal Highness is a great supporter of the work of children’s hospices and we are extremely honoured that she was able to visit our very first hospice and learn more about the difference it has made to thousands of local children with life-limiting conditions and their families,” said Mr Farwell. 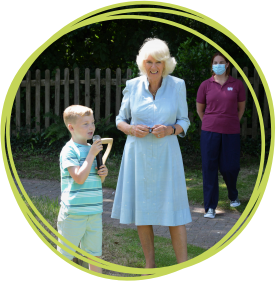 “The Duchess is a person with tremendous warmth and empathy and you could see that being displayed at every turn on this visit, whether it be engaging with children and families that she has met, or our long-term supporters in our garden. She has a word of encouragement for everybody, and that’s a very special attribute.”