Home What we do Inspiring stories Stanley’s story 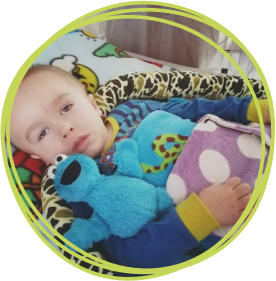 Family will be 'forever grateful' to hospice for the vital support during Stanley’s short life and after he died
Stanley had Tay Sachs disease and died in his Mum's arms at Little Bridge House, aged 4.

When four-year-old Stanley sadly died in his mum Emma's arms at Little Bridge House in June 2019, the love, kindness and support the family received from the hospice helped give them the time and space they needed to say goodbye.

Here, Emma explains why the family will be forever grateful to Little Bridge House for the vital help and support during Stanley’s short life and after he died.

"Just over four years ago in March 2016 we were given the devastating news that our one-year-old son, Stanley, had a life-limiting condition called Tay Sachs disease. He would become complexly ill and it was unlikely he would live to see his 5th birthday.

"Shortly after receiving this news we were referred to Little Bridge House and had our first stay in June 2016.

"I remember we felt so nervous, the thought of using a hospice filled us with sadness and thoughts of end of life.

We couldn’t have been more wrong. We had the best times at Little Bridge House and it became like a second home to us.

"We would stay at the hospice once every three months or so. Stanley’s needs became so complex and each time we walked through the doors for a stay it felt like a huge weight being lifted from us.

"Handing over all medications and therapies and just being able to be Mum to Stanley and his older brother Fynn for a few days was an amazing feeling. Fynn loved his time at the hospice and the Sibling Team are amazing.

"Last year in June, Stanley became more unwell and we were all exhausted, we were offered a stay at Little Bridge House for some support and to recharge our batteries. 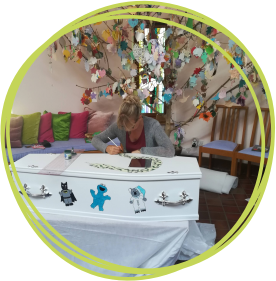 "Stanley sadly died in my arms the day after we arrived. He was four years old.

"The love, kindness and support we received over the next few days and weeks from the staff was just everything we needed and I honestly don’t know how we would have managed without them all.

"We were able to keep Stanley with us for another six days after he died. We placed him on a bed in the Starborn cold room and Fynn put all his favourite toys around him; we stayed in a bedroom right opposite him so we were close at all times.

"Family and friends were able to come and say goodbye. And for us to have that precious time with Stanley after he died was a gift. Without the hospice this would not have been possible.

"We were given much-needed help to plan Stanley’s funeral by our amazing contact worker Mel. We were helped to put together the order of service and liaise with everyone from the funeral home to the vicar; nothing was too much trouble.

I wanted to decorate Stanley’s coffin myself so it was arranged that it would be delivered to the hospice and I was given the time and space to paint it.

"Having the Sibling Team there to keep Fynn occupied was so helpful and gave him a much-needed break from the sadness. He was free to come and go to see Stanley and us as he pleased, and could then go back and play for a bit.

"We will be forever grateful to Little Bridge House for the vital help and support during Stanley’s short life and after he died."