Home What we do Inspiring stories Lucas' Coronavirus story 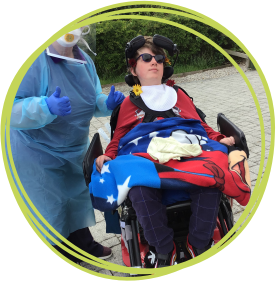 In the weeks before the COVID-19 lockdown, Rachel and Jason Willingham, like many parents of children with complex medical needs, started discussing what would happen should either of them become poorly with Coronavirus.

Falling ill with the disease would present unimaginable challenges for the Plymouth family, who were already shielding 12-year-old Lucas, who has a rare genetic condition and needs around-the-clock care.

Lucas’ condition requires him to use a wheelchair and he has significant learning difficulties. He is non-verbal, has a tracheostomy to help him breathe, is fed through a tube and has uncontrollable seizures.

They also worried about what would happen to his twin sister, Hope, and younger sister, Betsy, 10 should the pandemic reach their front door.

So, when their worst fears were realised at end of April, it was CHSW’s Little Harbour hospice in St Austell that stepped in to help them through the unthinkable.

Rachel said she started to feel unwell shortly after a work colleague tested positive for this illness. Suffering from a high temperature and severe fatigue, she shut herself away in the spare bedroom at home to protect the family. But when Jason also started to feel unwell, they turned to Little Harbour for help.

“I was completely hysterical and crying on the phone – this was absolutely the worst-case scenario for us,” said Rachel.

“Lucas has a rare genetic condition and needs around-the-clock care so the thought of not being able to look after him terrified us.”

Within hours of making the panicked call to Little Harbour, the Care Team arrived at their family home in Stoke, Plymouth, to collect Lucas and bring him to the safety of the hospice at Porthpean, where the family had enjoyed many regular respite stays since Lucas was aged three.

“They were completely amazing,” said Rachel. “We felt a huge overwhelming sense of relief when they said they could help as we were very poorly and just couldn’t give Lucas the level of care he needed.

“There isn’t a part of Lucas that isn’t affected by his condition. I hate the thought of people caring for Lucas who don’t know him, but we know he is completely safe at Little Harbour.

“We were one of the first families to use the hospice when it opened in 2011 and Lucas actually laid the foundation stone when it was being built. It was quite life-changing for us to have somewhere we can trust 100 per cent with our special needs child.”

Sadly, within a few hours of arriving at the hospice, Lucas also developed Covid-19 symptoms. A high temperature was not unusual, but he had also suffered seizures, so a sputum sample was sent off for testing.

“When the hospice called to say the test had come back Covid-positive it broke our hearts,” said Rachel.

“I had complete faith in the hospice but as a mum, I just wanted to be there with Lucas.”

During the weeks that followed, the team at Little Harbour implemented new COVID-19 procedures to care for Lucas while ensuring their own safety. They maintained contact with Rachel and Jason with regular Zoom calls, and by sending pictures and video of Lucas at the hospice.

“Claire and the team were just brilliant and worked unbelievably hard to keep us updated,” said Rachel. “We also knew we were able to call whenever we wanted – often two-or-three times a day – to ask how Lucas was doing. Lucas was even able to take part in a Zoom call with his teacher and classmates.”

As soon as Rachel had made a complete recovery, the team arranged for her to come and see Lucas for the first time since the family had been separated.

“I had a negative test result come back and was able to stay the weekend with Lucas at Little Harbour,” said Rachel.

“It was the first time I’d seen him for more than two weeks and it felt wonderful to cuddle him again. He had been incredibly well looked after and gave me the best smile ever. Staff laid on an afternoon tea in the garden and it was so lovely to be with him again after everything we’d all been through.”

Lucas continued to make a complete recovery over the next few weeks and on May 29, one month and a day after first being admitted to Little Harbour, he was able to go home to his family in Plymouth.

“We had a big celebration with lots of balloons and bubbles when Lucas came home,” said Rachel. “He is very happy, completely chilled out, and like most teenagers, loves his bed!”

CHSW is continuing to support the Willingham family, alongside more than 500 other children with life-limiting conditions and their families across the South West. While respite stays have been largely cancelled due to the COVID-19 outbreak, Little Harbour and the charity’s other hospices – Little Bridge House in Barnstaple and Charlton Farm in Bristol – remain open for emergency and end-of-life stays.

Care Teams have adapted to be able to continue to provide support to families wherever it is needed, whether over the telephone or in the family home. And while the charity will always prioritise the children and families it works with, its nurses have also been working alongside NHS partners to help ensure that no-one who needs care is left on their own.

For the Willinghams, that support continues, not just for Lucas, but for the whole family.

“Since Lucas came home, the Care Team has visited us to spend time with Lucas, meaning we can spend some precious time with our other children, who have also been affected by all this,” said Rachel.

“We just can’t thank Children’s Hospice South West enough for everything they are doing for us – the care they provide is beyond special.”