Home What we do Inspiring stories Jack's story 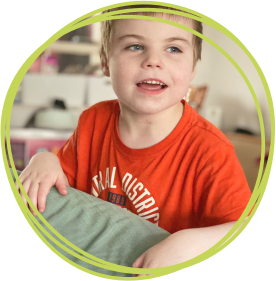 Jack is 7 & has a range of complex needs including epilepsy and severe learning difficulties.
Following his diagnosis, Jack started visiting Charlton Farm for short breaks with his family when he was 3 years old.

At 18 months old my son Jack had his first seizure. It was really scary. I was 7 months pregnant with my daughter at the time, one moment he was asleep in his cot and the next he was seizing and turning blue. He was rushed to hospital but continued seizing over and over again for hours. They put him on strong medication which kept him unconscious but stopped the seizures. After a very long nerve-wracking weekend, a neurologist came in and told us that Jack had epilepsy. What followed was test after test to identify the cause, they ruled out meningitis and all those other immediate issues, they did EEGs, CT scans and MRIs. Eventually they sent away some blood for genetic testing and found he had a gene mutation called SCN2A, which is very rare, but one of the main side effects of it is extreme, difficult to control, epilepsy.

Jack, who is now 7, has lots of complex needs including severe learning difficulties, he has the comprehension of a 4- or 5-month-old, he cannot walk or talk, and he has a form of autism. He is on multiple medications and a special ketogenic diet. At its worst, he can have 50-100 seizures a day. But even on a good day he requires constant 24/7 supervision.

Like other families in our position, we can’t just call up a babysitter to look after Jack, we need someone who understands his condition and can understand being around seizures and when to call an ambulance.

About 3 or 4 months after his diagnosis the team at the hospital suggested contacting Children’s Hospice South West (CHSW) to see if there was any way we could get some respite. We made an appointment to have a look around CHSW’s local hospice, Charlton Farm, which was pretty daunting, and I was very apprehensive. I kept thinking ‘oh my gosh, we’re going to a hospice and this is very scary’. But we went and it was just the most magical place, really set up for the children and their families and we instantly felt relaxed and at home. Jack was 3-years old when we first visited, and we’ve never looked back; it’s been truly amazing for us.

Having respite stays at Charlton Farm is the time for my husband Andy and I to have that break and support we desperately need. We have 10 nights a year allocated, which is enough to have a couple of weekends at the hospice or some time away in the school holidays. Just a couple of nights respite does us no-end of good when life is so full-on with a very poorly child.

Before the pandemic, when we were able to have our allocated stays at Charlton Farm, Jack would stay downstairs with the nursing team, and we would sleep upstairs in a mini apartment, which had a bedroom for us, a bathroom and an adjoining room for Emily, our daughter. Jack’s service dog would also be able to come with us, which was really nice.

The Care Team would look after Jack 24/7, allowing us to sleep, rest, and get up when we wanted.

The care is very family-focused and we could have as much involvement with his day as we wanted. I liked the care team to do all the meds, the bathing and all the tasks we usually have to do, and we’d get to do all the fun things with him; we’d get to be mum and dad, to be parents and not carers.

While at Charlton Farm, I can take the children for a swim or we can go out for the day knowing we have an extra pair of hands. We can focus just on Emily or she can be looked after by the sibling team so we can catchup on some much-needed sleep. They feed us too, so I don’t have to worry about meals, which is very relaxing. The care is very much focused around what the family needs and wants. 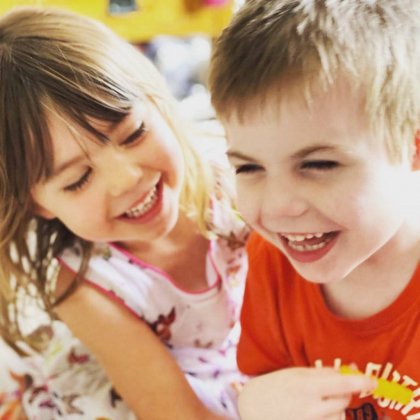 When news of COVID-19 hit, we worried for Jack as he’s incredibly vulnerable, and so we took the decision to take him out of school. Andy was able to work from home, which he is still doing now, and that’s how it’s been ever since. We don’t really do anything or go anywhere. It’s really tough.

Charlton Farm have been brilliant. They are on the other end of the phone if we need someone to talk to and they’ve come out to see us and looked after Jack, bringing with them lots of activities for Emily to do which gave Andy and I a short breather from this craziness.

The care team at Charlton Farm understand where we’re coming from and offer practical support. They don’t judge you for being at the end of your tether, or frustrated, angry or sad. They just get it.

The prospect of being able to visit Charlton Farm for a respite break again feels exciting. I don’t know that we’ll go back to some sort of normal soon, but I very much look forward to the time when we can come and visit. That would be amazing.