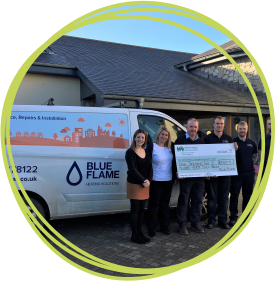 Our 12-month fundraising campaign has raised over £9,000 for charity!
Our staff chose Children’s Hospice South West as its 2018 charity of the year

Our staff chose Children’s Hospice South West as its 2018 charity of the year as we wanted to make supporting a local charity one of our priorities during our 30th anniversary celebrations.

With a £5,000 target in place, we held a series of events over the year the team and raised just shy of £9,500! Absolutely outstanding!

Our marketing co-ordinator, Jess Bolitho, who led on the fundraising campaign, said: “We are truly amazed by the amount of money the team raised for Children’s Hospice South West”

To smash our target by nearly 100% is an outstanding effort and we’re proud of how everyone got involved as part of our 30th anniversary celebrations and support this great cause.We had a lot of fun, created some brilliant opportunities for the team to work together and have helped support a brilliant charity.

During the year the Blue Flame team held a race night, a World Cup sweepstake, a sea shanty choir evening and a bake off event amongst other events.

Our Sales manager Duncan also took part in the charity’s Gib or Bust banger rally challenge, while 2 of our  responsive repair engineers, Mitch Vague and Toby Keast climbed Mount Kilamanjaro! Between them they raised over £4000!!

Bernadette Chambers, corporate partnerships fundraiser for Children’s Hospice South West said: “On behalf of all of the children and families that we support at Little Harbour children’s hospice in St Austell we would like to thank all of the Blue Flame staff for their generosity and commitment to fundraising throughout their 30th anniversary year.

“We really enjoyed seeing and hearing updates throughout the year on the various different activities that they were taking part in and they really have raised a fantastic amount of money.”

A massive thank you to everyone who helped us raise a fantastic amount of money for such a worthy local charity.