Local singer, John Prescott, has been entertaining the public by socially-distanced busking and doorstep singing around Clevedon in support of Children’s Hospice South West (CHSW).

John said: “One of the days started with an invitation to sing safely outside for residents at a local home. It was lovely to see them smiling through the doors. On another cold and wet night I surprised abirthday girl and family friends that deserved some Christmas cheer!” 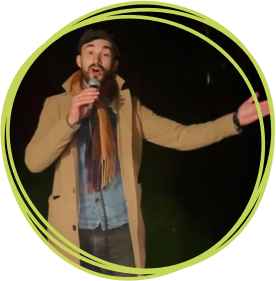 He continued: “It’s been a rollercoaster year with probably some of the biggest hurdles we’ve ever had to face. Although we haven’t been able to see our loved ones as much as we’d like this year, it’s been very heart warming and emotional for me to see reactions from the doorstep singing as you can feel the connection through music.”

So far John has raised £1,200 for CHSW’s Charlton Farm, in Wraxall that relies largely on voluntary donations to exist. Whilst Charlton Farm hasn’t been able to offer routine respite stays to local families since the pandemic, the care team have been visiting families in their homes and offering support virtually and over the telephone. This service has been a vital link with families who need care and support now more than ever.

Julie Draper, CHSW Area Fundraiser, said: “John has been spreading his musical magic around Clevedon as well as spreading the word about CHSW. He also took part in our week-long festive music event, The Jolly Jingle, which raised significant funds for the charity. He’s a star and we’d like to say a huge thank you to him.”