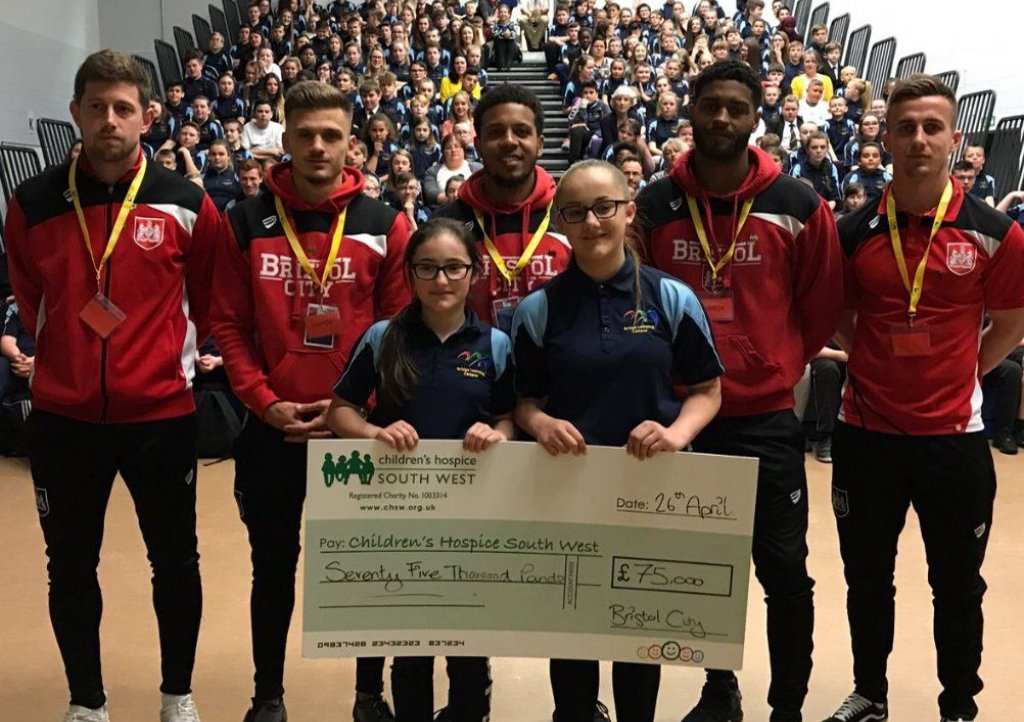 The local school has been working tirelessly to raise funds for the charity over the course of the academic year, and their efforts have seen them raise £1,000.

In addition to the school’s cheque presentation, Olly Slym from CHSW informed the players that their various fundraisers has seen an incredible £75,000 be donated to the Hospice since the partnership was formed two years ago.

Slym said: “It’s ten years since Charlton Farm opened its doors to the 205 families we support in the Bristol area, so it is a big celebration.  It’s great that we have come down to Bridge Learning Campus, who have supported us and have raised loads of money in our partnership.  Furthermore, Bristol City have now raised £75,000. I surprised the lads with this figure earlier and it really is an amazing amount of money.  It’s been a fantastic partnership between the Hospice, football club and now the school.”

Paul Todd, assistant headteacher at Bridge Learning Campus, commented: “Two years ago we asked each of our four houses to support a charity and one of them picked Children’s Hospice South West.

“They started fundraising and it was so successful we branched it out to become our whole school charity for this year. There’s been a non-school uniform day and various cake sales, with all donations going towards the charity.  We have also visited Charlton Farm on numerous occasions so the students are aware of what’s going on up there and the valuable cause we are raising money for.”

The players were joined at Bridge Learning Campus in Hartcliffe by mascot Scrumpy the Robin and staff from Bristol City Community Trust.

Ambassador Bryan said: “This school has done so much work for the Hospice and it’s a charity we work closely with. To come here and kick a ball about with the children who have put so much effort into raising money has been really fun.  We can affect a lot of people and the kids are buzzing we have come to see them. If we as players are supporting the charity it may set something off in their brain that they want to support it in the future, and, or now.”