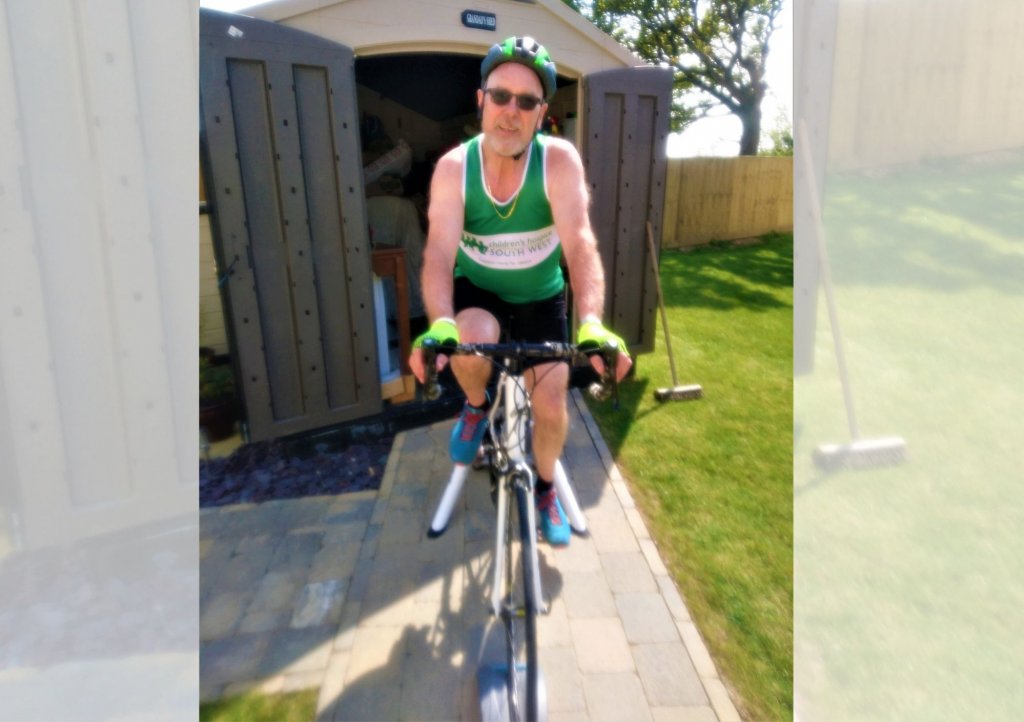 A 71-year-old Children’s Hospice South West (CHSW) supporter who has ‘done it all for the charity’ is set to take on what could be his biggest challenge yet – without even leaving his house!

Bereaved dad Rick Dean, from Bude, has ran and walked thousands of miles, jumped out an aeroplane and abseiled down one of the UK’s highest waterfalls, raising huge amounts of money for the charity that supported him and his wife Julie following the death of their son Kierran.

This June, despite claiming to be ‘not too keen’ on cycling, he will be taking on a 205-mile three-day static cycle to remember Kierran on what would have been his 24th birthday.

“I had signed up to do CHSW’s Ride for Precious Lives, a 205-mile three-day cycle ride from St Austell to Bristol but the event has been postponed until next May due to the coronavirus lockdown,” said Rick.

“My wife Julie is having palliative chemotherapy so I can't commit to doing the ride next May and rather than waste my training or let down the people who have supported me, I intend to cover the same amount of miles on a static trainer at home from June 24-26.

The 25th would have been our son’s 24th birthday so I’m calling my challenge the ‘Ride to Remember Precious Lives’.

Kierran, who had Commune Variable Immune Deficiency (CVID) and spent much of his short life in and out of hospital, died in 2003.

“We were devastated by Kierran’s death and are not sure how we would have coped without the support from Little Bridge House,” said Julie, who volunteers in the hospice reception in Fremington, near Barnstaple.

“The hospice helped us so much and we wanted to give something back.”

Rick, who counts 24 half-marathons and the London Marathon among his gruelling fundraising achievements, said he hadn’t been on a bike for 30 years, but Ride for Precious Lives was the only children’s’ hospice challenge that he hadn’t done.

“I’m not too keen on cycling but thought I’d better give it a go,” said Rick, a retired maintenance man at Petroc in Barnstaple.

I was looking forward to doing the ride so doing it in my back garden outside my shed is the next best thing.

“It will be a big challenge but I never give up – even when I did my marathons I said I would crawl across the finish line if I had too and this will be the same. It’s not about the time, it’s about completing the challenge.”

Rick has been training for his challenge by cycling up to 35 miles-a-day on a static trainer kindly loaned to him by Ride It bike shop in Bude.

“Lee and the team have been fantastic, loaning me all the equipment and helping me to set it up – I can’t thank them enough,” said Rick, who hopes to raise £1,500 for CHSW.

You can make a donation to Rick's online fundraising page.