Home What we do Inspiring stories Rick's story 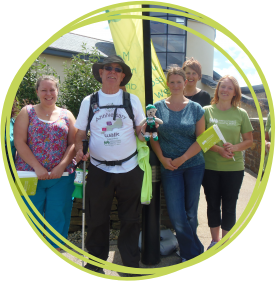 Bereaved father, Rick has been a long term supporter of CHSW after our Little Bridge House hospice supported Rick and his family following the death of their son Kierran, who suffered from Commune Variable Immune Deficiency (CVID).

Kierran was born without an immune system and spent much of his short life in and out of hospitals. Following his death, Kierran was laid to rest in the ‘Starborn’ room at Little Bridge House. This is a special facility, which allows for friends and family to visit the child in a beautiful children’s room rather than a funeral parlour.

The hospice also helped with the funeral arrangements and continued to provide bereavement support for the family at the time they needed it most. Rick and his wife, Julie, were understandably devastated by their son’s death and openly admit that without the support from CHSW, they are not sure how they would have coped. Julie said:

The hospice helped us so much following Kierran’s death that we wanted to give something back.

Julie now volunteers for the hospice and Rick fundraises tirelessly and has set himself many running challenges over the years to support the vital work of Children’s Hospice South West.

For example, not content with just running Exeter’s Great West Run for CHSW, Rick set himself the task of running the Great North, East, and South Runs as welll!

This was a particularly incredible fundraising challenge as, after breaking his foot in the Barnstaple Marathon running in support of CHSW, Rick claimed; ‘I am never running again!'

Rick never fails to amaze us with his support and passion for CHSW. To run four half marathons for us at the age of 66 is quite incredible.

Rick has said that when he’s feeling a bit tired, he thinks of Kierran and says, ‘Come on Kierran, give me a kick’, which gives him the motivation to keep training and he is truely inspirational in his fundraising drive.