Home What we do Inspiring stories Matthew's story 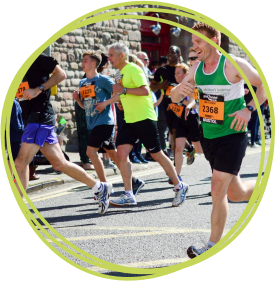 Running for CHSW
Matthew Bennett, a teacher from Bristol, took part in the Great Bristol 10k in 2017 for Children’s Hospice South West.

Warm and sunny spring Sunday mornings in Bristol go well with a good coffee, some close friends for company and perhaps a stroll around the Harbourside to admire the beautiful city within which we live. Why then, may you ask, would I choose to spoil the peace and tranquillity of such plans and instead drink nothing but water, surround myself with thousands of people and run around the harbour-side with such determination that most of what I saw was grey tarmac?

As I forced myself out of bed, I consoled myself with the fact that it was a) sunny, and b) all going to be worth it as I had raised some money for Children’s Hospice South West (CHSW).

This was my fourth time running the Bristol 10K but the first time I would have done it for charity, and the ridiculous thing was that not once before had I ever felt nervous, but now I could feel the adrenaline starting to surge, even though it was only 7am.

Dressing myself in the green vest of the CHSW (a garment not designed for the likes of men of my age, who often try on such things in shops and then realise they’re no longer in their 20s and carefully place it back on the rack hoping no one had witnessed it), I made the short walk into the centre. Numbers gradually increased as other runners appeared out of side streets throughout Bedminster, each wearing a different running shirt or, in most cases, the name of a different charity on their backs. It’s always so heart-warming to see the lengths that good people will go to help others and it gave me a real boost to feel that I was part of that same wave of good intention this year.

The CHSW ‘spot’, outside the Shakespeare Inn on Prince Street, was beginning to heat up in the sun and also in its atmosphere. More and more green runners appeared from over Prince Street Bridge and they were matched by those intending to cheer us on as we passed by the 9th kilometre. And so, with bananas eaten, faces painted and ‘good lucks’ uttered, we all made our way to our various starting positions.

As races go, it went like all the others. However, what was different this year, was that as I ran, I heard people shout ‘come on Children’s Hospice’! I had never been cheered on like this before and it was a lift to the spirits to keep going.

Around the 8th kilometre, however, I began to feel a little fragile, as I had been really pushing myself to make 45 minutes.

Thinking that I had little left in the tank to give, the green corner of the Shakespeare Inn and the CHSW cheer point loomed into sight. By far the biggest cheer of the whole course; the most noise, the loudest shouts and the most fun was to be found here. Us green-shirted runners made a point of taking a wide arc to soak up the atmosphere and people whistled, screamed and children banged strange inflatable sticks together. This lifted all our spirits at this crucial stage as the final kilometre beckoned. However, the added burst of speed and accompanying adrenaline rush did make me want to throw up now more than ever. Still, I battled on to the bitter end, surrounded by relieved athletes as the finishing arch came ever nearer to passing over our heads.

As it turned out, I didn’t quite beat my personal best; I am a year older after all. However, thanks to the wonderful people at CHSW, the crowds of well-wishers and the feeling that by running, I was actually going to be making a difference, this was by far the best year yet.”

Find out more about the Great Bristol 10k