Home What we do Inspiring stories Dominic's Story 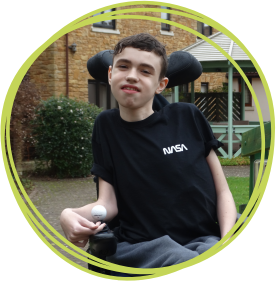 Dominic is 15 and has Duchenne muscular dystrophy (DMD), a genetic disorder that causes progressive muscle degeneration
Dominic and his family love their visits to Little Bridge House and are looking forward to this year's Rainbow Run

Dominic Stacey and his family have a very special reason to be taking part in Children’s Hospice South West’s Rainbow Run at Exeter Westpoint next month.

The 15-year-old from Pinhoe in Exeter, together with his mum, dad and three sisters, will be joining hundreds of people at the event on Saturday, June 22 to help raise money for the charity that has supported them for the last eight years.

Dominic has Duchenne muscular dystrophy (DMD), a genetic disorder that causes progressive muscle degeneration; he and his family have been able to take regular respite breaks at CHSW’s Little Bridge House hospice in North Devon, time that gives them chance to unwind and enjoy special moments together.

Mum Caroline said the family started receiving help from CHSW after a referral from their palliative care nurse when Dominic was seven years old. It was the first time they had received any hands-on care support.

“The condition affects all the muscles in Dom’s body, which means they are gradually wasting,” she said.

“He stopped walking when he was nine and as time is getting on, he’s progressively finding it harder to use his arms and to do anything for himself. He also has very thin bones and gets breaks quite regularly. He has a feeding tube because eating is quite tiring for him; he did have epilepsy but hasn’t had a seizure now for four years.

Dom is bright and very funny. And he’s got three amazing sisters who will do anything for him.

“They keep him grounded and don’t treat him differently for being disabled. They’ll do things like help him take off his shoes and hold his cup of tea and put the straw in so he can drink out of it. 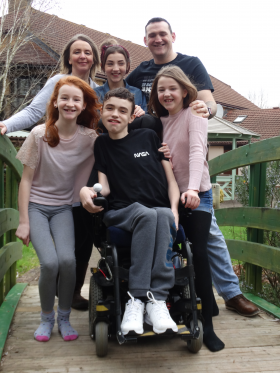 “They are like any siblings though and can fight like cat and dog – but they love each other at the same time.”

Dominic, his mum and dad, and sisters – Cate aged 13, Georgia aged 11, and Tahlia aged 9 – visit the children’s hospice near Barnstaple around three-to-four times a year.

“They love the games room and messy play and the outside area,” said Caroline. “They have so much fun – Dom will be in his chair and they’ll be on their bikes just zooming around. The girls once tied a trailer to the back of his wheelchair and they all sat in it going around the garden.

The girls absolutely love the sibling team. For days before they come, they’re planning what they are going to do.

A stay at Little Bridge House also means that mum and dad can spend some precious time together, something that it very rare when juggling busy jobs and roles as parents and carers.

“It gives Caroline and I a bit of a break too,” said dad, also called Dominic.

“It gives us time to go for lunch or just zip off for a few hours to spend a bit of time together, which is so rare.”

Caroline took part in Rainbow Run two years ago in memory of a friend’s son who had died. This year, the whole family, Dominic included, say they are looking forward to taking part in the charity’s flagship summer fundraising event.

“My friend’s son had DMD and I wanted to do something, so I ran Rainbow Run in his memory and wore his name on the back of my shirt,” said Caroline.

It’s just lots of fun – a really fun day, there’s loads of people in fancy dress, all sorts of stalls.

“There is a fun warm-up and you set off and run through these stations where you get paint chucked at you. There was a great atmosphere and people were really chatty – it’s just a really fun day out and for a really good cause.” 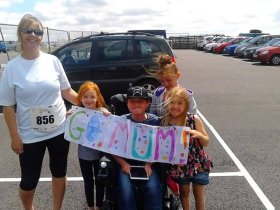 The Stacey family has supported this year's event by recording a radio commercial at Radio Exe (see video below!).

Anyone aged five and above can take part in Rainbow Run at Westpoint on Saturday, June 22 and help raise vital funds for CHSW, which provides free care for more than 500 families like Dominic’s across the South West.

The charity needs around £10million a year to run its three hospices, including Little Bridge House in Devon, and around 85 per cent of that comes though fundraising.

Rainbow Run participants run, jog or walk through colourful bursts of powder paint at special colour stations set up around the 5k course.

A morning at the Radio Exe studios

A morning at the Radio Exe studios