Home What we do Inspiring stories Amy-Victoria's story 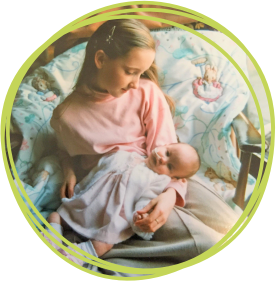 Our daughter Amy-Victoria was born prematurely by caesarean section on August 28, 1996 in Torbay Hospital. We were delighted.

However, our lives were to change forever when at 10 days old Amy was ‘blue-lighted’ to Exeter neonatal unit, where we were informed after tests she had a rare condition known as Edwards' syndrome (trisomy 18) and that this condition was life-limiting and not much was known about it at the time.

During this difficult time in the neonatal unit, Amy’s paediatric consultant said she had heard about a new hospice that had just opened in North Devon, and would we consider being referred there? Her thoughts were that as a family we may all benefit from the care and support that the hospice, Little Bridge House, had to offer.

At this point though we didn’t know anything about Children’s Hospice South West, and so following a pre-visit and referral, our journey and visits to Little Bridge House began. When the neonatal unit thought Amy was at a medical point of being well enough to be moved, we moved as a complete family from Exeter to Little Bridge House.

On the day this happened our life with Amy was transformed to the peaceful, less stressful environment, where the care team, staff and other families, greeted us and Amy, who was the first baby at the house, with open arms.

The warmth and welcome we received was truly a life changing experience for us all.

Amy’s older sister Caroline could share some much-needed time with her baby sister, learn the new life skills to care for Amy (not normally associated with 10-year-olds) but could also be herself, continue her education, see her sister, and meet other families in a similar situation to ourselves.

At the same time, Amy’s father returned from the John Radcliffe Hospital in Oxford, where he had undergone pioneering surgery the day after Amy had been born. He could be with his ‘girls’ at this very critical time, in comfortable, homely surroundings but also to learn from the professional staff and care team how carry out Amy’s specialist care.

To have the peace of Little Bridge House after a hectic uncertain hospital environment was such a massive relief, as was sharing this with staff and families.

One of the highlights of staying at Little Bridge House was getting together for a lovely home cooked meal!

We then stayed on several occasions throughout Amy’s short life with welcome support from all the care team and other families. The professional care team helped us throughout, with all the medical practical teaching and the personal support and guidance, so we could return home to our village.

Nine months later when Amy died on May 30, 1997, we left Torbay Hospital and went to Little Bridge House to spend precious time together until her funeral. We have since attended many of the beautiful remembrance services and have appreciated the on-going care and support in by the bereavement team.

Over the years since our Little Bridge House time, we have continued our attachment with guest speaking and fundraising events. We will always be thankful to the care team, staff and families we met there, but in particular to the co-founder Jill Farwell and all the fundraisers who achieved her goal to build Little Bridge House, and to the team that now continue the work that is Children’s Hospice South West.