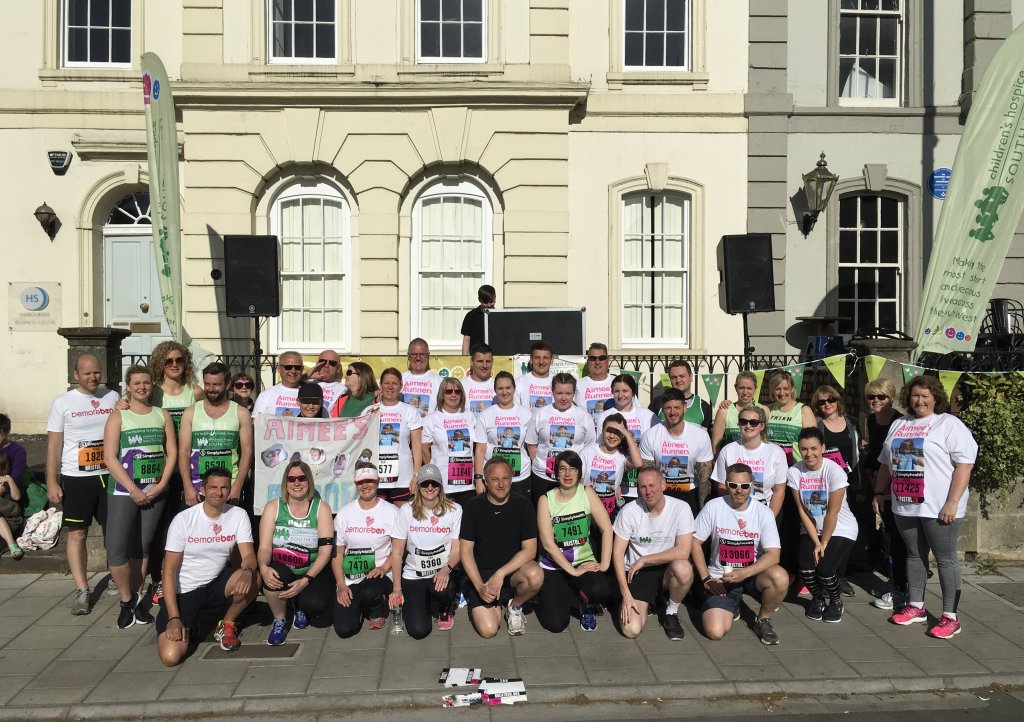 Team CHSW were out in force at this year’s Great Bristol 10k.

A 60-strong team of runners took on the run at the weekend in support of Children’s Hospice South West (CHSW). Runners were given a boost by hearing Sam FM’s Downsy encourage participants as he took to the mic at the charity’s cheer point, located outside The Shakespeare Tavern on Prince Street. This was Downsy’s first appearance in his role as Partnership Ambassador for CHSW.

Amongst those running were six members of Avon & Somerset Constabulary who were wearing full riot gear, including shields; and 28 friends and family running in memory of Aimee Humphries, who would have turned 14 on the day of the run and whose family were supported by the charity.

Also taking part were runners supporting Be More Ben – a fundraising group formed in memory of Ben Pritchard who died at CHSW’s Charlton Farm in November 2017. Ben was a huge Bristol City football fan so Paul Manning, a friend of the family, ran wearing its ‘Scrumpy’ mascot suit! Ben’s dad Shane also took part, alongside players from Bristol City's Under-18 and Under-23 teams and members of Bristol Sport.

Notably, it was Hazel Thompson’s first 10k as she proudly ran in memory of her son Daniel and who was supported by Charlton Farm. Hazel said, “I am so grateful for all CHSW did for us and will carry on supporting and fundraising for this fantastic charity.” Hazel set herself a target of £500 but has smashed this by raising over £2.5k!

Olly Slym, CHSW Community Fundraiser, said “We are so proud of every one of our runners, each of whom had their own special reason for taking part in support of CHSW. The next big run in Bristol is the Half Marathon on 23rd September 2018. Please get in touch if you’d like to be part of Team CHSW and help make the most of short and precious lives across the South West.”