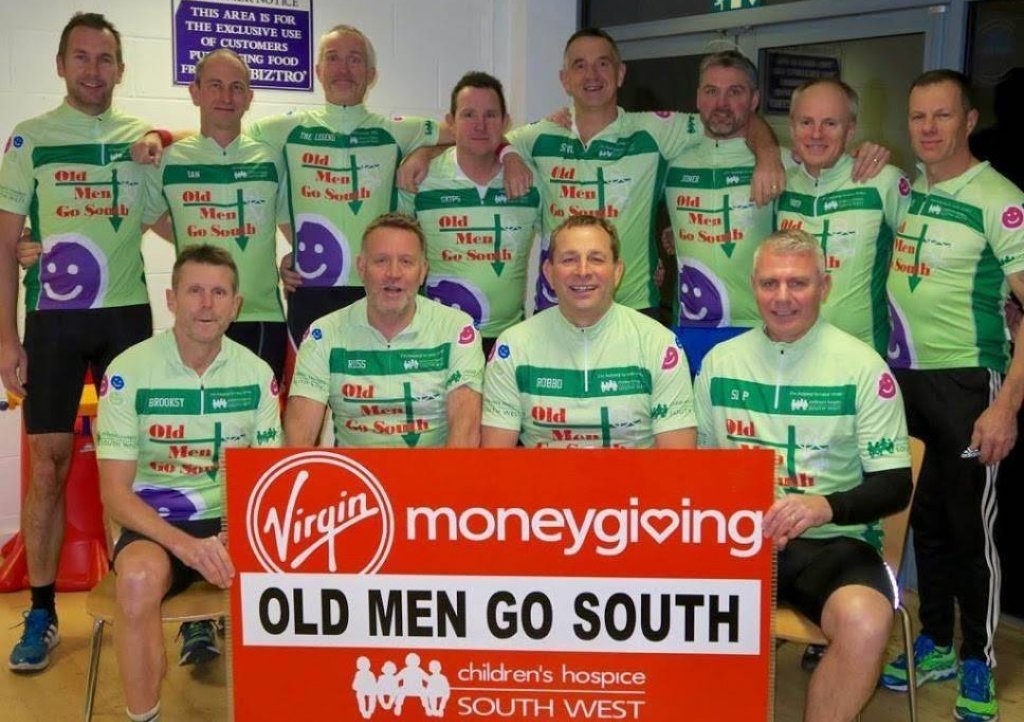 A Taunton man is celebrating turning 50 this year by taking on one of the UK’s ultimate sporting challenges …with a little help from his friends!

Pete Robinson will be joined by 12 fellow ‘old men’ on a 1,000-mile cycle ride from John O’Groats in Scotland to Land’s End in Cornwall later this month in a bid to raise thousands of pounds for Children’s Hospice South West (CHSW).

The friends, all aged 50 to 59, will be clocking up an average of 80 miles a day during the 12-day Old Men Go South cycle challenge, which gets under way on May 29.

As well as putting in many miles of training, they have been busy fundraising and have already raised an astonishing £14,000. They hope to raise £20,000 for the charity, which offers care and respite to around 500 families a year at its three hospices in Somerset, Devon and Cornwall.

Pete, who turned 50 on January 1, said: “I was looking for a sporting challenge in my 50th year and what started out as a chat in the pub has turned into an adventure of a lifetime with friends, and the chance to raise a stack of cash for a brilliant cause.

“We have had such an amazing response to our story that we reached our original target of £12,000 and decided to raise our target to £20,000 in the hope that CHSW can benefit even more from everyone’s generosity. We’d like to thank everyone for their support.” 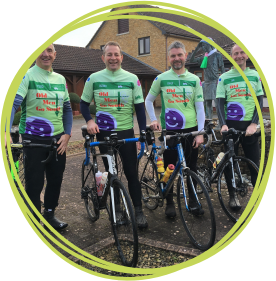 Pete will be joined by friends Mark Shepherd, Mike Stevens, Graham Davies, Mark Jones, Guy Johnson, Simon Penny, Neil Glinn, Russ Nurcombe, Ian Yendall, Andy Brooks, Andy Trust and Simon Doyle. The Old Men Go South team, most of whom are from Taunton with a couple hailing from Newton Abbot and Bristol, are planning to call in at each of the charity’s hospices in Bristol, Barnstaple and St Austell.

Pete said: “Cycling the length of the UK is the ultimate challenge for many cyclists and completing the 1,000-mile journey in support of CHSW motivates the entire OMGS team and gives the whole event a real sense of purpose.

“CHSW does such important work and being able to support them with a group of friends is a great privilege. Please support the team and give generously so that CHSW can help many more families.”

Fundraising activities to date have included a winter charity ball, quiz night, the race night and turbo training in Taunton’s Orchard Shopping Centre. The team started training in October and as well as turbo training sessions, have undertaken 90-mile rides across Exmoor. In January, they cycled more than 100 miles from Taunton to the CHSW’s Little Bridge House hospice in Barnstaple and back.

CHSW community fundraiser Paula Hullett said: “It was lovely to welcome Pete and some of the team to Little Bridge House and give them a real insight into the difference the charity makes to so many families.

“They have really taken CHSW to their hearts and have done a remarkable job raising money to support our three hospices. We would like to thank the team for being such fantastic ambassadors for the charity and wish them all the very best for their JOGLE cycle.”

You can support the team by making an online donation on their Virgin Money Giving fundraising page.

And if you’d like to wave Pete and the OMGS riders off on their penultimate leg from Taunton to Launceston, they will be leaving from Taunton Vale Sports Club at 8.30am on Saturday, June 8.