Brother and sister Bodie and Gracie Blake, from Ideford, near Kingsteignton, spent the first weekend of their Easter holidays in Cumbria scaling Scafell Pike, England’s highest peak. They are due to head to Scotland to tackle Ben Nevis, the UK’s highest, in their summer holidays.

Bodie, aged 11 and Gracie, aged nine, were joined by mum Rachel and dad Steve and made it to the top and back down in just four hours, 27 minutes, despite deep snow and fog at the summit.

Mum Rachel said the children, who both go to Exeter School, heard about the work of CHSW while watching Children in Need. They then decided to make it their mission to help the charity, which offers vital respite and care to more than 500 South West families at its children’s hospices in Devon, Cornwall and Somerset. 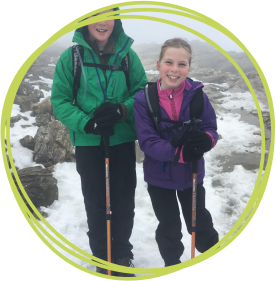 “For Ben Nevis, they will be joined by their gran and grandad, two cousins, uncle and aunty, as well as mum and dad.”

You can sponsor Bodie and Gracie and help boost their fundraising on their Virgin Money Giving page.