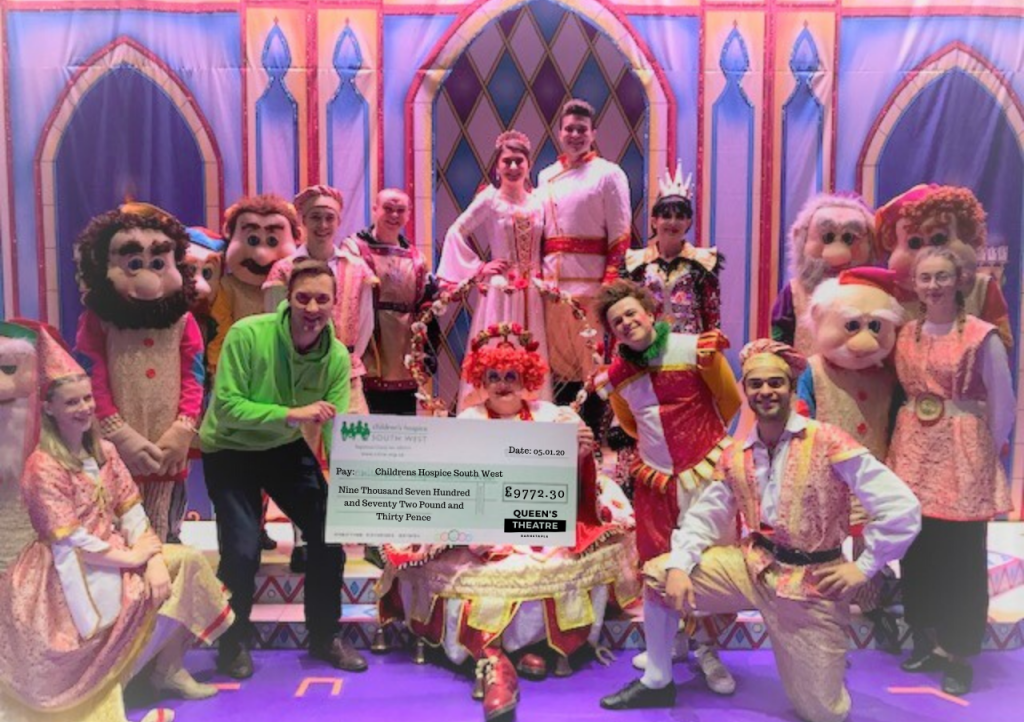 Bucket collections were held after each performance of Snow White and the Seven Dwarfs at the Queen’s Theatre, from December 13 to January 5.

Cast members, who also visited the charity’s Little Bridge House hospice in Fremington to entertain children in the run-up to Christmas, encouraged panto-goers to make a donation after each show throughout the festive period.

Stuart Shanks, Director of Venues for theatre management company Selladoor, said: “The generosity of local audiences is absolutely heart-warming! We are thrilled to be able to donate such a fantastic sum of money to this beloved local charity and are committed to supporting local charities through our venues each year.”

CHSW community fundraiser Neville Pope took to the stage at the end of one of the final performances to accept a cheque for £9,772 on behalf of the charity.

He said: “We’d like to thank the Queen’s Theatre, the Snow White cast and crew, and the many thousands of audience members who made such kind donations throughout the festive season.

“Children’s Hospice South West relies almost entirely on voluntary contributions so this money really will make a huge difference and mean that we can continue to provide such vital support to the local families who use Little Bridge House.”

Children’s Hospice South West offers respite for more than 500 children with life-limiting conditions and their families across the South West, including nearly 200 at its Little Bridge House hospice in Fremington, North Devon.

The charity, which relies almost entirely on voluntary contributions, also offers specialist palliative care, emergency stays, end-of-life care, and bereavement support. Parents can take a break from being primary carers for a few days and brothers and sisters are supported by a dedicated sibling team, meaning the whole family can relax and make precious memories together.