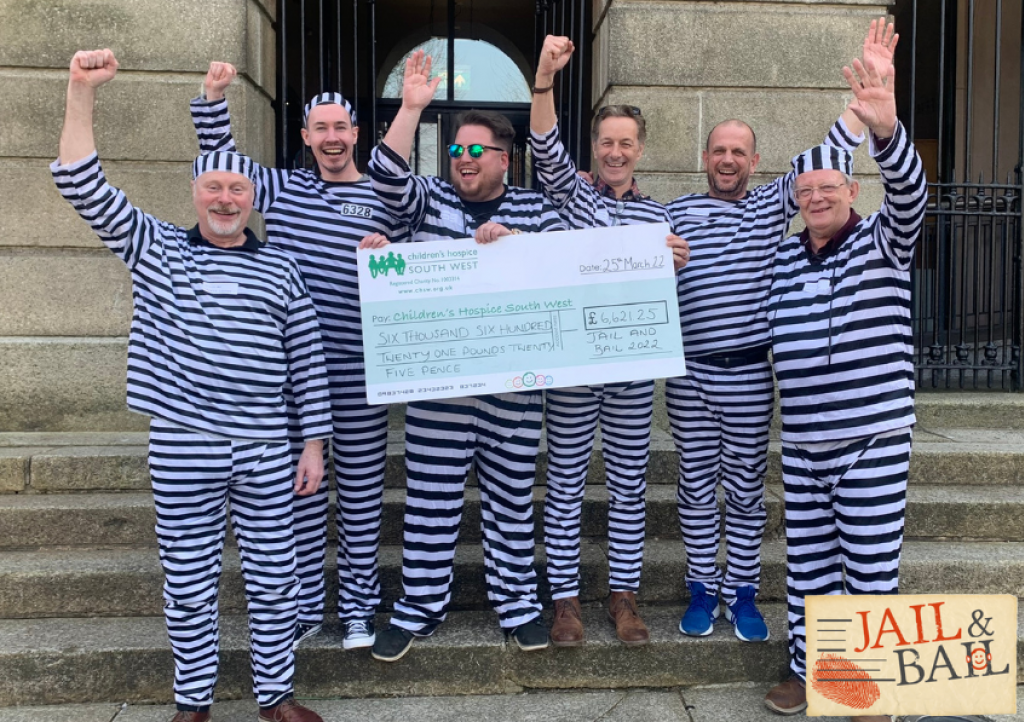 Six representatives from the local community were arrested, put on trial and locked up for their fictitious crimes on Friday when they took part in Children’s Hospice South West’s (CHSW) Jail and Bail fundraiser in Bodmin.

Passers-by had to look twice as they saw the six being marched through Bodmin town centre on their way to their mock trial at Bodmin Jail. Put on trial were Simon Jones from Wildanet, Gareth Looker from Looker Marketing Communications, Darren Buckley from Cornwall Chamber of Commerce, Kevin Hicks – Grand Worshipful Master of the Mark Master Masons and Mike Bee and Spencer Woods from Big Box Advertising.

Their ‘crimes’ included taking too many selfies, attending too many networking events and eating too many biscuits. Following the trial, led by Leanne Elliott who played the judge, all prisoners were found guilty and sentenced to four hours in jail where they had to raise minimum bail of £999 to be released.

Kiley Pearce, Events Fundraiser for CHSW said; “We always try to make our Jail and Bail event a really fun day for those taking part as we appreciate they are all giving up their time but at the heart of it they are raising vital funds for families whose child faces a devastating diagnosis. The funds raised from this event  will help those families to make the most of the short but very precious lives of their children with help from our hospices including Little Harbour in St Austell.”

By the end of the day over £7000 had been raised by the prisoners with donations still being made by their friends, family, colleagues and connections.

Of all of the charity events I have ever been to this is the best organised, the most fun, the most bonkers and possibly the most rewarding as well.

Thanks are extended to Bodmin Police, Waffles Coffee Shop, Leanne Elliott and Michelle Handley for playing the judge and clerk, Barnett Photo Studio, all the team at Bodmin Jail and Shire Hall along with everyone who donated auction prizes, made donations to set the prisoners free and contributed to the event.

If you are interested in getting involved in fundraising for CHSW simply click here for fundraising ideas or call Little Harbour on 01726 871800 and speak to one of the team.