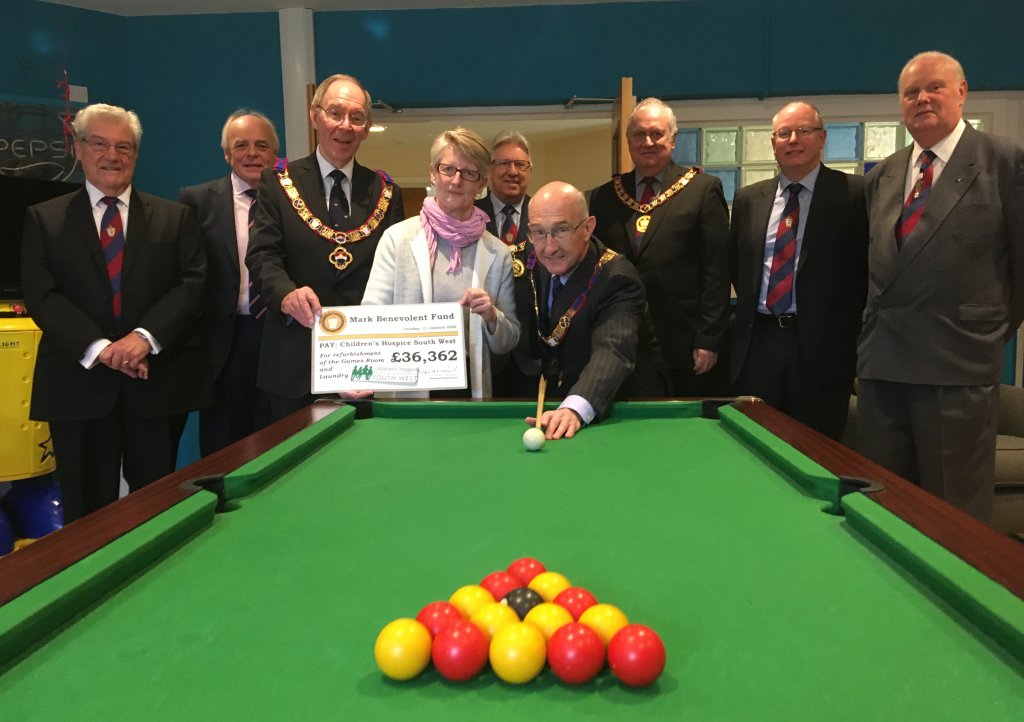 The games room at North Devon’s Little Bridge House children’s hospice has been given a major re-vamp thanks to a £36,362 donation by the Grand Lodge of Mark Master Masons.

The new-look space offers an enhanced fun haven for children and parents, with a pool table, table football and large screen television, as well as the latest games consoles and computers and a host of magical assistive technology designed for children with life-limiting conditions.

The hospice in Fremington, near Barnstaple, is run by Children’s Hospice South West (CHSW) and offers respite stays to nearly 200 local families.

“Our hospice enables families to relax and have fun together, so being able to offer them such a vibrant, flexible and accessible space is an important extension of the care and support we offer.

Families love it – it’s the icing on the cake at Little Bridge House.

CHSW Chief Executive and co-founder Eddie Farwell added: “On some days when things aren’t going so well, that’s when our hospices can really make a difference and help families make the most of the time they have together.

“Being able to offer them such a fantastic games room is incredibly important – it’s a place where the pressures of life can be put to one side for a short time and where precious memories are made.

The state-of-the-art new games rooms was funded by a donation by the Mark Benevolent Fund, the official charity of the Grand Lodge of Mark Master Masons, the third largest branch of Freemasonry. It follows a £10,000 donation last month by the Provincial Grand Lodge’s Devon Mark Charity Association for a new medical emergency equipment store.

Mr Balsom said: “We are delighted to have joined forces with Children’s Hospice South West in this all-important refurbishment project that reaches deep into the heart of the community, giving enjoyment and stimulation to children with life-limiting conditions.

“Our 36,000 members will be pleased to know that their donations are being used wisely by helping those in need right across the UK.”