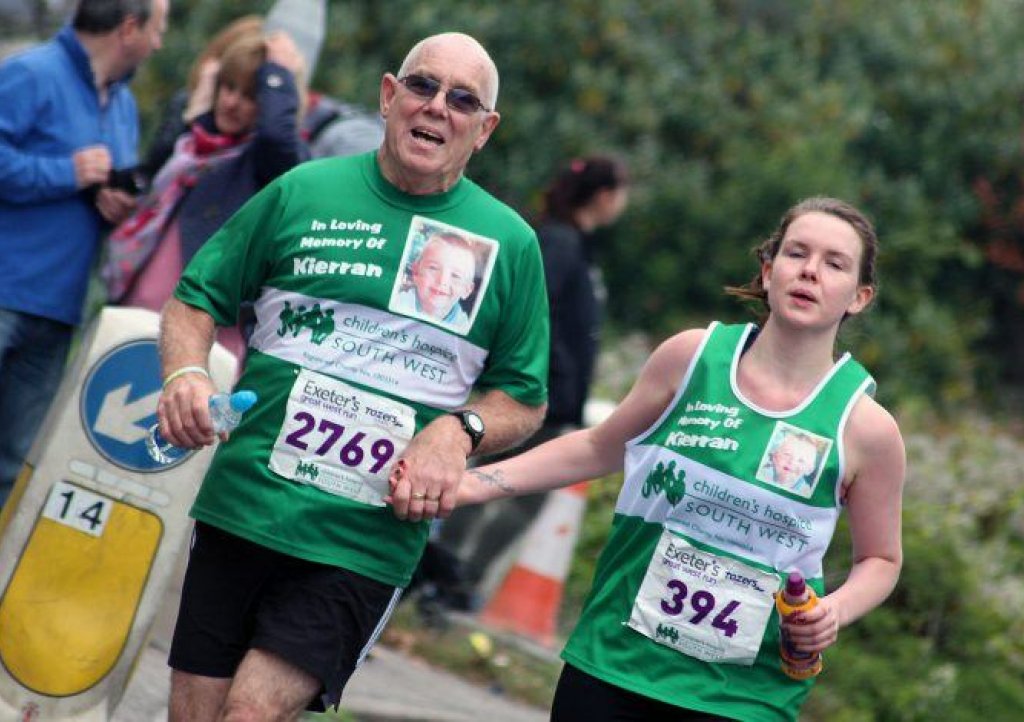 It will be a very special moment for 68-year-old Rick Dean when the day of the 2017 Vitality Bath Half Marathon finally arrives, as he’ll be running the race in memory of his son Kierran, who would have turned 21 in June.

It will also be the last race for Rick who has spent the last nine years tirelessly fundraising for Children’s Hospice South West, the charity who provided a lifeline for him and his wife when they lost Kierran in 2003.

“I couldn’t tell you how much I have raised over the years for Children’s Hospice South West,” admitted Rick.

“Since I became a registered fundraiser in 2008, I have done 15 or 16 half marathons, completed the London Marathon, jumped out of planes and abseiled down a waterfall to raise money for the hospice.

“They were of such huge support when we lost Kierran that I want to do all I can to give something back.”

Kierran was just 3 when he was diagnosed with a disease affecting his immune system. He had several opportunities for respite care at the Children’s Hospice but each time an infection such as pneumonia would mean that he couldn’t go.

At 6 years old he received a bone marrow transplant at Great Ormond Street, keeping him in isolation at the hospital for seven months, but his body sadly rejected the treatment.

Kierran left hospital one Friday and passed away at the family home, where he had asked to return, two days later.

For Rick and his wife, being able to turn to Children’s Hospice South West, which was very close to their home, was of enormous comfort.

The hospice helped them to come to terms with the shock and the loss, and helped to make arrangements such as preparing the house for when Kierran came home and, later, the funeral.

The family, who also have two older daughters, have continued to visit Children’s Hospice South West in the years following Kierran’s death as the support it offers is wide-ranging: from respite and short breaks to emergency care, end of life care and bereavement support, the hospice is a sanctuary for children with life-limiting conditions, and their families, across the South West.

Celebrating its 25th anniversary in 2016, the charity operates three hospices: Little Bridge House in North Devon, where the Deans live, Charlton Farm in North Somerset and Little Harbour in Cornwall.

Rick became a registered fundraiser for Children’s Hospice South West in 2008 following his own diagnosis of prostate cancer.

“After surgery and therapy, I returned to work at a local college where I was lucky enough to have access to a full sports and fitness programme,” he recalls.

“I felt unfit and tired, and they said why not come along and get fit! So I did, and then I got the bug and realised that I should do something with it. As it was close to the sixth anniversary of Kierran’s death, I signed up to the 2009 Bath Half Marathon that March and that’s where my fundraising started.”

Rick’s list of activities to raise money for the hospice is nothing short of impressive. He once ran four half marathons on four consecutive weekends, he walked 150 miles from the Children’s Hospice South West in Devon to the Hospice in Cornwall and back, and he has taken part in a number of adventurous feats including parachuting and abseiling.

His biggest moment of pride was being nominated as a Torchbearer to carry the Olympic Flame through his home town, Barnstaple, in May 2012, cheered on by family, friends and staff from Children’s Hospice South West.

“If it hadn’t been for losing Kierran I would probably never have done any of what I have achieved over the last few years,” says Rick.

“Although it is great to raise money for Children’s Hospice South West and support them with their wonderful work, this is really secondary to me doing these activities with Kierran by my side. Running and walking are individual sports but I do them with my son and he is always my inspiration.

“Having two older girls, I had always imagined playing football with Kierran and doing typical boy things, and this way I still get to have time with him and do that. It is his legacy to me.”

So it is that Rick is preparing for his second Bath Half and looking forward to running a time of around 2 hours 20 minutes.

As his schedule already involves a peaceful Sunday morning run by himself, with Kierran never far from his thoughts, and a mid-week run of 8-9 miles, Rick is already doing all the training he needs in preparation for the 2017 Vitality Bath Half Marathon.

“What I really like is a race that starts and finishes in the same place,” he says, “mostly because my wife comes to support and I feel bad if she has to move from one place to another to watch!

“The Vitality Bath Half is two laps of the same course and is really well supported all the way round, so it’s a great event to run.

“I’ll be 68 when I run Bath and although I’m a little more creaky than I was, I did want to enter one last race. With it being within a couple of months of Kierran’s 21st birthday, it all just fitted in.”

The Vitality Bath Half Marathon is one of the top three single day charity fundraising events in the UK, raising over £2.2 million at the 2016 race alone.

The award-winning event supports over 130 different charities and Children’s Hospice South West is a Gold/Silver Bond charity. For runners like Rick, the race offers a superb opportunity to raise funds for a cause close to the heart. As for whether this race will really be his last, that remains to be seen.