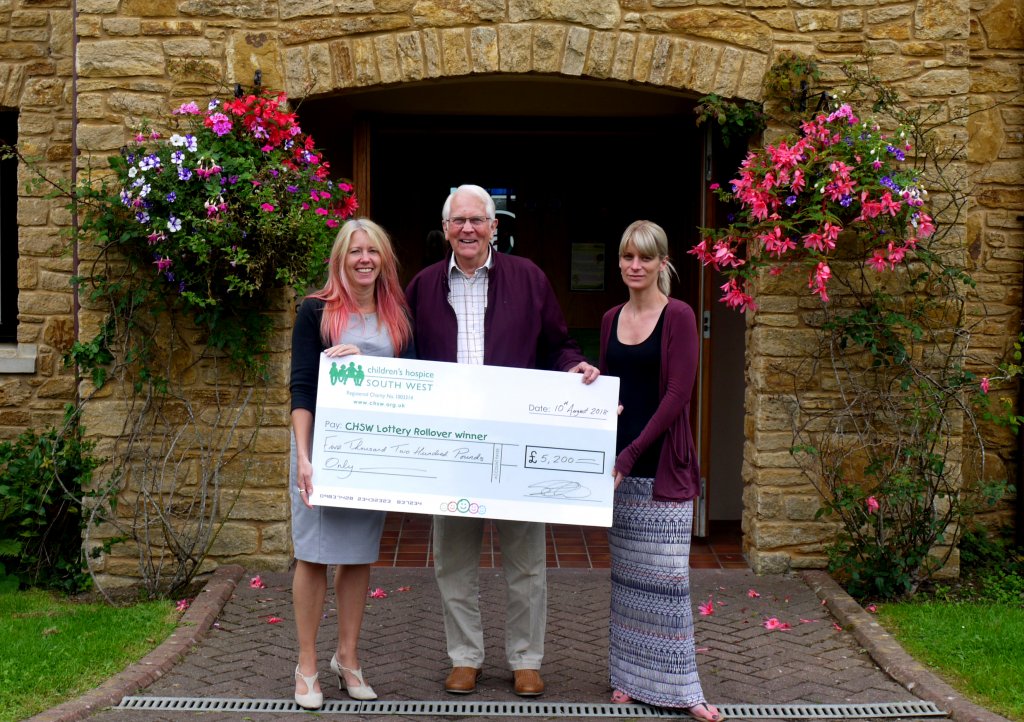 A Buckfastleigh couple are celebrating after winning more than £5,000 in the Children’s Hospice South West Lottery.

Norman and Jacqui Elliott started playing the charity’s weekly Lottery more than ten years ago, although Jacqui says they never expected to win anything: “I didn’t realise it was a Lottery at first, I thought of it as just making a regular donation. In fact, when I took the phone call, I thought the charity were calling to ask us for more money, not to tell Norman he’d won something!”

The couple, who have a keen interest in horses, visited Little Bridge House, CHSW’s hospice in Fremington, Devon, to receive a cheque after scooping the bonus rollover prize in August. They were inspired to support the charity after seeing news stories about jockeys visiting poorly children in hospitals. Jacqui says, “When you see these stories, you see how resilient the children are and it brings home how lucky you are yourself.” Norman agrees: “We’ve got a lot of children between us! Four children, and ten grandchildren, and we realised how thankful we should be that they are all healthy when others aren’t so fortunate. I’m an old softie really.”

The £5,200 rollover was the first prize Norman and Jacqui have won through the weekly draw, and when CHSW’s Lottery Officer Stephanie Charles telephoned to give them the good news, they wanted to share their story and inspire others to sign up and play too. Jacqui said, “Just go for it! Don’t think about winning, but go for it anyway because of what’s behind it.”

CHSW cares for children with life-limiting conditions and their families, providing respite breaks, end of life and palliative care, and support for families through bereavement and beyond. It costs more than £10 million to run the charity’s three very special hospices in Devon, North Somerset and Cornwall, most of which comes from fundraising and donations.

CHSW’s weekly Lottery is a fun and easy way to support the charity’s work, with a chance of winning up to £1,000 in prizes each week. There is also a bonus rollover, which increases each week until one lucky player wins it. The rollover had been steadily increasing since February 2018, until Norman’s lucky number came up.