Home What we do Inspiring stories Steve's story 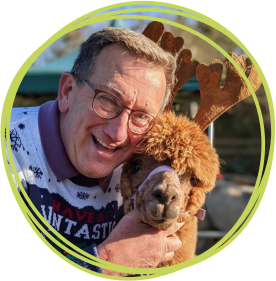 Steve is one of our wonderful volunteers and to say he lends a hand where needed would a huge understatement. Steve usually lends both hands and would probably lend a third if he had one!

Steve, 58, has been volunteering at Little Bridge House since 2005 after taking early retirement in 2003 due to ill health. He has become increasingly committed to Children’s Hospice South West and has taken on a variety of tasks during the last 17 years.

The married father of three lives in Fremington, about 350 yards from Little Bridge House, and began offering his time at the hospice after talking to his neighbour, who was member of CHSW’s Fremington Friends Group.

Steve said: “After I retired I soon became very bored with daytime telly as I was only 40 and expected to be working as a manager for British Home Stores for another 20 years.

“My neighbour Audrey McGregor said I should become a volunteer as it would give me a focus and apart from a short break in 2013, have been here ever since.

“I also met Emma Ridgewell Howard, and to be honest, after chatting with her and experiencing the passion she spoke about CHSW with, I was hooked.

Of course, the charity had an emotional appeal because of what it does, but also because I had three very healthy children and it felt right to support families who found themselves without that gift.

Over the years, Steve has supported the Little Bridge House fundraising team at countless events, shows and galas. He has also taken part in quite a few fundraising events himself, including a walk from John O'Groats to Land’s End, and a bracing December dive into the sea with a group of trainee solicitors!

Steve also organised three seven-seater bike tours with friend Dave Butt from 2011 to 2015, raising more than £50,000 for the charity.

Other highlights have included being introduced to the charity’s Royal Patron, Her Royal Highness The Duchess of Cornwall and meeting many Somerset cricketers during various fundraisers at the County Ground in Taunton.

He’s delivered numerous donations to auctioneers, including some old Dinky toys that sold for £400, and even manned a barbecue for nearly 200 runners crossing the finish line at The Hartland Hartbreaker.

Steve has also spoken about the work of the charity at countless community events and for two years during the pandemic, he and fellow volunteer Lionel Murphy helped sort through hundreds of boxes of vital PPE so that it could be distributed to 10 local children and adult hospices.

He said his proudest achievement was coordinating CHSW’s Young Ambassador group, where he has recruited, trained, mentored and supported local students to form a group who run their own events and provide support to major CHSW Events.

“We now have 17 very committed supporters of CHSW, with plans to start groups in Taunton this year, and possibly Exeter in 2023/24,” said Steve.

“These students bring new, fresh, and sometimes whacky ideas to fundraising and have become a valuable part of the CHSW friends groups family.”

Steve said he volunteers because it's fun and helps him to make a small difference to the lives of those less fortunate.

And when he’s not volunteering, you can usually find Steve enjoying the other passions in his life – horse racing, golf, walking, his children, and his grandson.

Thank you Steve – you’re one of our stars!

Find out more about volunteering opportunities in our hospices, shops or in the community here.