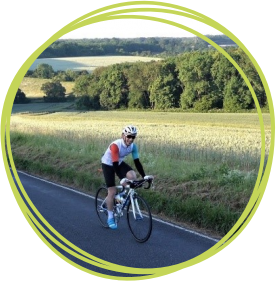 Phil cycled from the Kent coast to Somerset coast in one day!
I wanted to take the time to write a little recap of my Chase the Sun ride

Phil Jolly from Cornwall took on the Chase the Sun cycle on 22nd June cycling over 200 miles and rasied £809.73 for Children's Hospice South West. Here's his write up from the day:

"I wanted to take the time to write a little recap of my Chase the Sun ride, firstly to let everyone have a little insight into my day in the saddle, to share my experience and also so I can look back on this in months and years to come – maybe I might learn something for the next "Big Ride" (whatever it may be).

Around 800 riders lined up at Minster seafront on the Isle of Sheppey. I made my way to the front ready to chip off and see who was feeling strong and ready to come with me.

It had been an early start. Making it to Sheppey for sunset on the closest Saturday to the summer solstice meant a 02:30am alarm. There’s a lot to think about and remember for an unsupported coast to coast ride, mostly what to eat, what clothing to take and tools to deal with any mechanical issues (more on two of those points to follow)! It was a quick drive to Sheppey where I lifted the bike off the car and found my way to the start line.

The organisers car set off with us all following for the first couple of miles before we were allowed off the leash. I decided to go off the front and see who was going to come with me. It turned out there was a strong, organised bunch of racers from a team based out of Milton Keynes.

The first 65km was fast, but I was happy with that.

My strategy was for three food stops, one at Crystal Palace, one at half way and one at 260km for a final refuel. Just before 07:30 I arrived at Cadence Performance in Crystal Palace for my breakfast stop. The guys from the Milton Keynes club sailed straight on to get food from their team car waiting at Richmond.

Between Crystal Palace and Hampton Court everything settled down and the route became a bit too urban – pretty uneventful section of the ride.

All was going nicely to plan once past Bushey Park. It was all going far too well! I settled in to a good pace and was ticking off the kilometres quickly. That’s when things changed! Just as I was coming out of Cherstey, I heard a bang from the back wheel and it locked up in the brake calipers bringing me to a quick stop – one of the spokes on the drive side had snapped. I quickly made the decision to open up the rear brake caliper, gaffer tape the broken spoke out of the way and ride the 10km or so on the broken wheel to Bagshot where I knew there was a bike shop.

Long story short, the amazing Jonno at Spokes bike shop in Bagshot got me on my way. This mechanical issue had set me back about an hour in total, but I was on my way again, trying not to push too hard to make up the time lost.

The next section between Bagshot and my half way point at Bramley (161km) was uneventful. Mostly leapfrogging slower groups on the road making my way to my second scheduled food stop.

As the route passed through the North Wessex Downs, I really made a conscious effort to enjoy the landscape around me. It really is a beautiful part of the country. Looking down into valleys with poppy fields, passing windmills and small villages this was definitely the most picturesque section of the route. I was feeling good, the roads were rolling hills and the sun was shining.

As good as I’d been feeling, at around 240km in, I had some aches and needed to get off the bike to stretch and take in more calories. I stoppped at a small pub and quickly eat some crisps!

As I got into the Mendip Hills, that’s when things started to feel harder. My legs were still strong, but the roads meant that a lot of effort was needed to cover any distance. The lanes were narrow with some steep short climbs and poor surfaces. That’s until we got close to Cheddar Gorge!

The descent of Cheddar Gorge was stunning! One of the most amazing pieces of road I’ve ridden. It was a fast descent with great tarmac and sweeping turns. My Garmin data says I hit 72kph as I descended. Towards the end of the descent,

I got held up behind a VW Transporter that couldn’t take the corners at the speed I was going so had to back off and just enjoy the ride.

After Cheddar, the road flattened out and it was the final push to the end. I gave my wife a call so she could cheer me coming into the seafront at Burnham on Sea. It was great to have the finish in sight and I crossed the line!

In total, it had taken about 13hrs 30mins to cross from the Kent Coast to the Somerset coast. My total riding time was 11h 35m; the biggest stop was for my mechanical issue at Bagshot.

To sum the ride up, it was a great challenge! The format of coast to coast during sunlight hours during mid summer makes for a great day out on a bike. I can’t wait for next year! My favourite stats from the ride are: nearly 11,000 calories burnt and an average riding speed of nearly 29kph.

Thanks to everyone who supported me with thoughts and wishes and with donations to the children’s hospice."