Home What we do Inspiring stories Margaret's Story 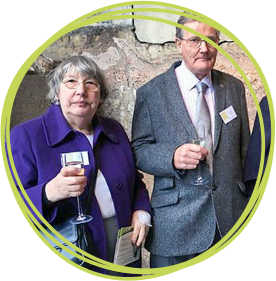 Margaret Marshall
Margaret has been involved with CHSW for well over ten years.

During Margaret's time at Charlton Farm she has counted tens of thousands of coins, lay on the floor on several occasions to spell out ‘Midnight Memory Walk’ and raised awareness of CHSW events. Spreading the word wherever she goes.

‘I became aware of the charity shortly after Little Bridge House had opened when a lady came to talk to our ladies group in Midsomer Norton. We visited Little Bridge House and started fundraising. We got even more involved when Babe’s Big Appeal was launched to raise money for the building of Charlton Farm.

Unless you’ve actually seen the hospices for yourselves you can never really know what’s it’s like here. You can talk to people about Charlton Farm and show them pictures, but it’s not the same as visiting in-person.

While Charlton Farm was being built people could come once a month and see for themselves the progress being made. From November 2006 to March 2007 tours were every Wednesday, Thursday, Friday and Saturday. The tours were hugely popular; it was manic!

On the very last Saturday before Charlton Farm opened I took four tours, which was really hard work. People had heard about Children’s Hospice South West because of the Babe Appeal and wanted to come and see the building; they came from far and wide.

“It’s been wonderful to see Charlton Farm through from the build to the opening, to now. It is so warm and friendly; inside the pillars are decorated with art and there are handprints on the wall in the messy play room.”

Last year I was asked to make some teenage dribble bibs, using fabric they’d like, which I did. I’ve been told they are the best bibs they’ve ever had!

I then made some special feeding bibs and I delivered these to the family who showed me round their house which they’d had adapted for their son. There was a lift, a wet-room and he even had a multi-sensory bedroom that his dad had made for him - it was wonderful to see! They said to me ‘going to Charlton Farm was the only holiday we get’ so I use their words as part of the tours that I give. It was wonderful to hear. When you hear a parent talk it’s so inspiring.

I will continue doing what I can for the hospice for as long as my chauffer can bring me! I couldn’t do what I do without my husband Tim and he is considered a volunteer too. He brings me to Charlton Farm and he’ll volunteer at CHSW events such as Santas on the Run. It’s been quite enlightening at times. I really have seen the other side of life.’