Home What we do Inspiring stories Jenny & Lynn's story 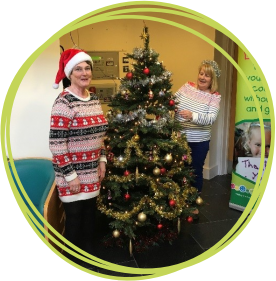 Jenny and Lynn volunteer with the Fundraising team at Little Harbour, and particularly enjoyed decorating the Christmas tree in Reception!

Jenny first got involved with Children’s Hospice South West in the summer of 2010, when she joined the Clay County Friends Group, and started fundraising with them by helping with tombolas at various events. She says: “The reason I got involved with CHSW was because my son Neil died in March 1980, when he was just eight years, five months old. I wanted to help raise money so other families could have the support that wasn’t around when Neil was ill.”

Initially, Jenny agreed to help with a mailing campaign to invite supporters to the opening of Little Harbour, to see what their amazing donations had achieved. She expected this to be one day’s work; instead, the mailing took three days and was the start of a weekly commitment to helping the Fundraising team with a variety of tasks.

I love it, because it is great fun and so rewarding.

"My tasks are varied: sorting and logging the daily post, franking the outgoing post, laminating, counting money, cleaning collection tins, wrapping sweets in cellophane to hand out to children at events, counting medals, and of course my volunteer friend Lynn and I decorate the Christmas tree in the Fundraising reception area.”

Lynn’s involvement with CHSW began almost 20 years earlier, when Eddie and Jill Farwell were first presenting the idea of building a children’s hospice in the South West. Lynn’s husband was President of the Fowey River Lions Club at the time, and organised the Fowey River Triathlon as a fundraising event for the Little Bridge House appeal, while Lynn and her friend Bella formed the Polruan Friends Group, organising events and street collections with willing volunteers.

As CHSW began to grow, Lynn felt this was a charity she wanted to be increasingly involved with. She says: “I was thankful for two healthy sons. I learnt to give talks to organisations and shorter talks at cheque presentations. When the appeal for funding for Little Harbour was announced, I became much busier with talks and presentations, and this coincided with my taking phased retirement from teaching, and I was asked to become a tour guide.

“Tours before the opening were exciting as each week the contents of the house increased. Tour talks were never the same, as I adapted to the groups visiting, and I met some amazing people who were dedicated to fundraising.”

Since Little Harbour opened, Lynn has continued to help out regularly in the Fundraising office.

Everyone is friendly and kind; volunteers are always included and valued.

The variety of tasks – even the laminating – give purpose to this pensioner! I am in awe of the parents and carers and just hope that I can help to make a difference.”

If you'd like to find our more about volunteering opportunities at CHSW, visit the jobs and volunteering page here.